Gazprom neftekhim Salavat was founded in 1948 as Industrial Complex No. 18. Its main objective was hydrogenation of heavy petroleum derivatives (fuel oil) to produce gasoline and diesel fuel.

Initially, it was planned to build Industrial Complex No. 18 in the town of Chernogorsk, Khakassia, to produce synthetic liquid fuel. A significant part of the equipment received from German factories as reparations had already been delivered to that site. In 1946, the management of Industrial Complex No. 18 under construction was formed in Chernogorsk. However, due to rapid development of the oil producing and refining industry in the Volga-Urals region (in the town of Ishimbai, later nicknamed «the Second Baku»), in 1947, the USSR government made a decision to transfer Industrial Complex No. 18 to Bashkiria in order to hydrogenate heavy petroleum derivatives (fuel oil) to produce gasoline and diesel fuel. 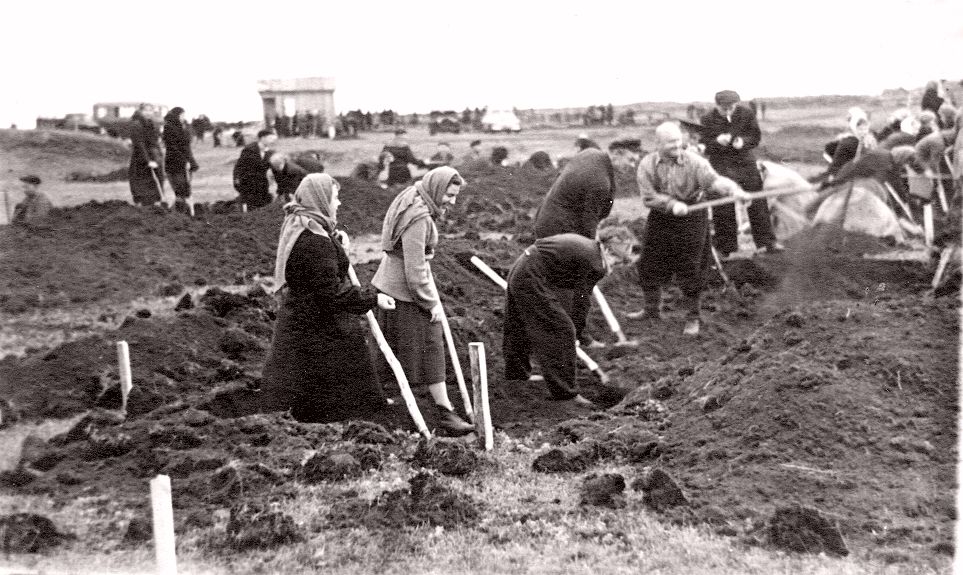 In 1948, people of 63 ethnic origins of the USSR came to the new construction site

The Decree of the Council of Ministers of the USSR of March 30, 1948 launched the construction process and fixed the capacity and the target product of the Industrial Complex as motor gasoline.

In June 1948, the first group of constructors together with the equipment arrived at the construction sites from Khakassia. The commission that had come there in May already prepared everything to meet the first constructors. A tent camp appeared soon in the present-day territory of Salavat.

During those years large-scale works were conducted on the construction sites of the Gas Plant, the Hydrogenation Unit, Salavat heat and power station, the Machinery and Repair Plant (Salavatneftemash today), the Catalyst Plant, the storage and retrieval workshop, the transfer system workshop and other support facilities. Construction of Novo-Ishimbaisky Refinery began.

In 1955, Oil Refinery units were put into operation. And in 1956, a high-capacity Oil Refinery already operated as part of the Industrial Complex producing much more gasoline than it was supposed to produce according to the project. Besides, it produced other types of liquid fuel. The Oil Refinery rapidly developed. New oil refining, gas condensate processing and secondary process units were under construction. 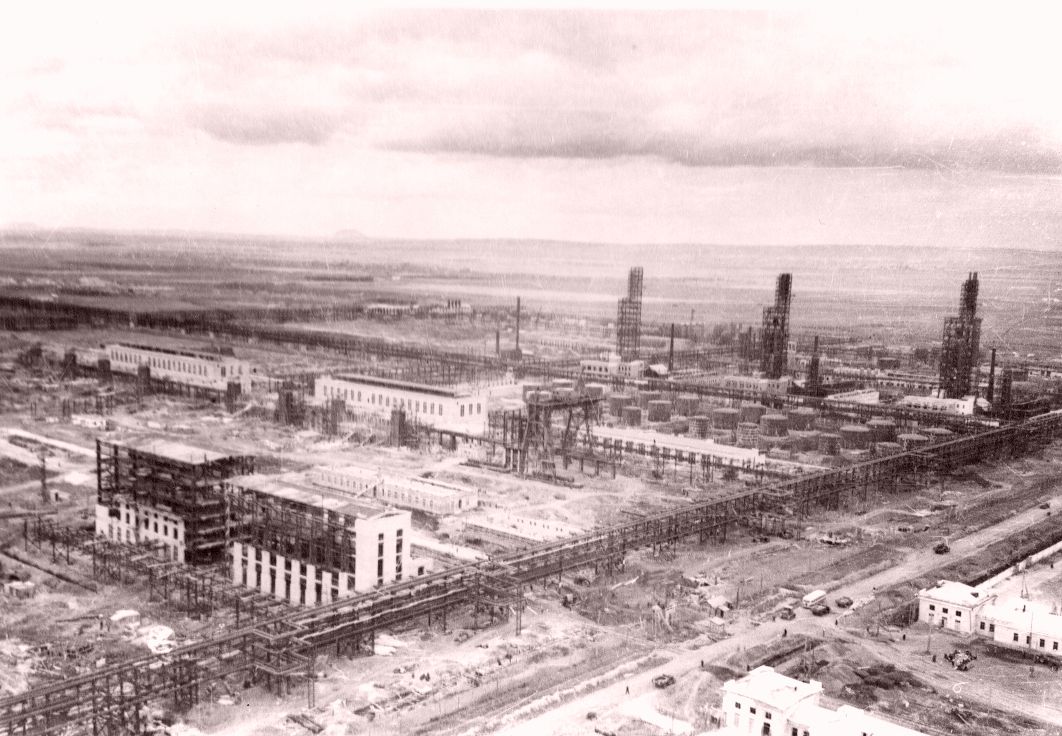 Construction of the Oil Refinery of Industrial Complex No. 18

High-sulphur crude oil processing supplied from the Arlan field discovered in the North of Bashkiriya in 1955 became an important stage for the Oil Refinery. The Oil Refinery started refining that oil in 1960 and was the first plant in the USSR that mastered it.

Designed as a small gasoline production plant, in the 1960s, the Industrial Complex turned into a rapidly developing petrochemical and oil refining center. Indeed, since that time production units that later on turned into the Petrochemical Plant, Monomer Plant, Sintez Plant and the Mineral Fertilizers Plant came to life.

In1962, Industrial Complex No. 18 became the first plant in the USSR that put into operation ahead of schedule an LDPE production unit, started a large-scale styrene, butyl and fatty alcohols production, increased the capacity of ammonia and urea production, made a transition of the Oil Refinery to high-sulphur oil refining with the development of secondary processes.

Along with industrial facilities, such social and cultural facilities as a stadium, a sanatorium-preventorium near the Nugush water storage, Medical Unit No. 20, the Mayak preventorium, the Sports Palace and the Neftekhimik Palace of Culture were constructed in Salavat. 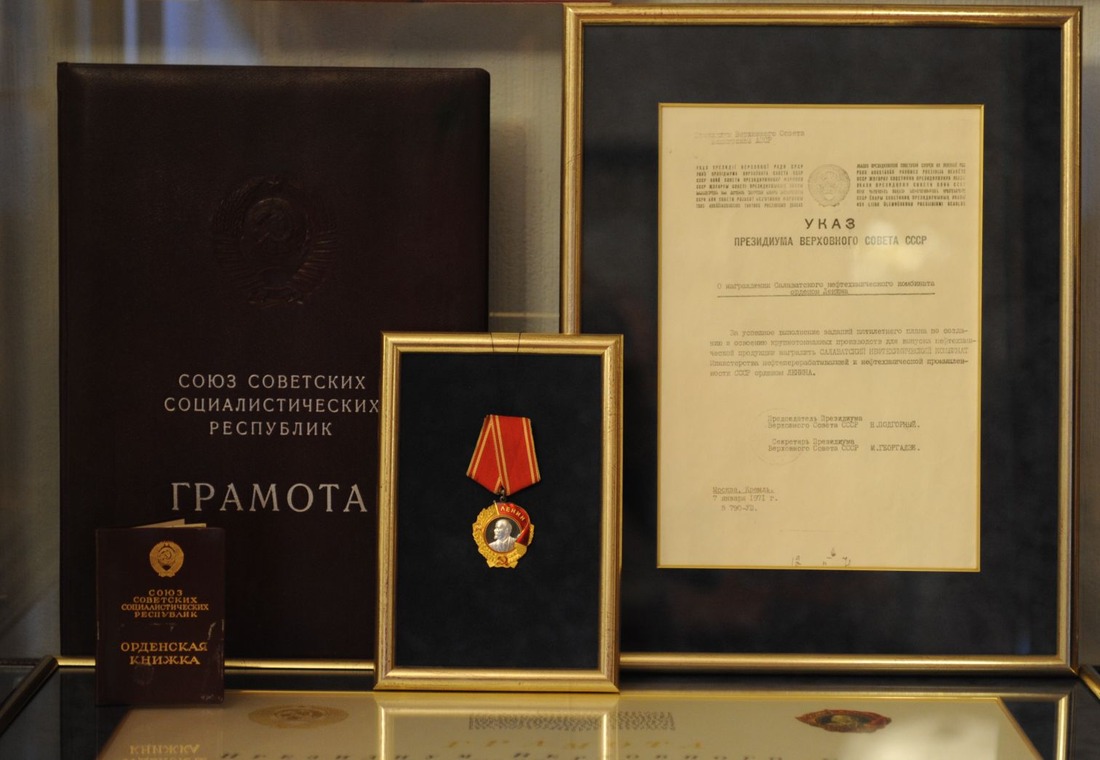 The Order of Lenin

The renovation of the Urea and Ammonia Plant was the Company’s real pride and turned it into the USSR largest supplier of mineral fertilizers. Following the results of the ninth Five-Year-Plan, the Company produced over 1 million tpa of fertilizers, twice exceeding the figures of 1970.

In the mid-1970s, the Salavat Petrochemical Complex became the largest petrochemical complex in the USSR and abroad, with a developed repair shop and a net of social facilities.

In short time new facilities for the production of ethylene and propylene, ethylene oxide, dodecyl mercaptan, polystyrene and glycols were commissioned. New processes such as catalytic reforming and hydrocracking were implemented.

By the mid-1980s, Salavatnefteorgsintez Production Association processed a quarter of Bashkir oil and all the condensate from the Orenburg deposit.

Administration Office of Salavat Petrochemical Industrial Complex in the 1980s

Large-scale production facilities such as EP-300 ethylene and propylene unit, butyl alcohol unit and AM-76 ammonia unit were put into operation. Furthermore, social and cultural and environmental facilities were intensively built and the sewage works were expanded.

Having passed through challenging times, by the end of the 1990s, Salavatnefteorgsintez again set a course for the increase of production capacities, modernization and further development of the Company and strengthening of its position in the domestic and world markets.

In 1999, for processing of Karachaganak gas condensate, ELOU-AVT-4 (atmospheric and vacuum distillation unit) with a capacity of 4 million tpa and a new crude desalter unit at AVT-4 facility were commissioned. 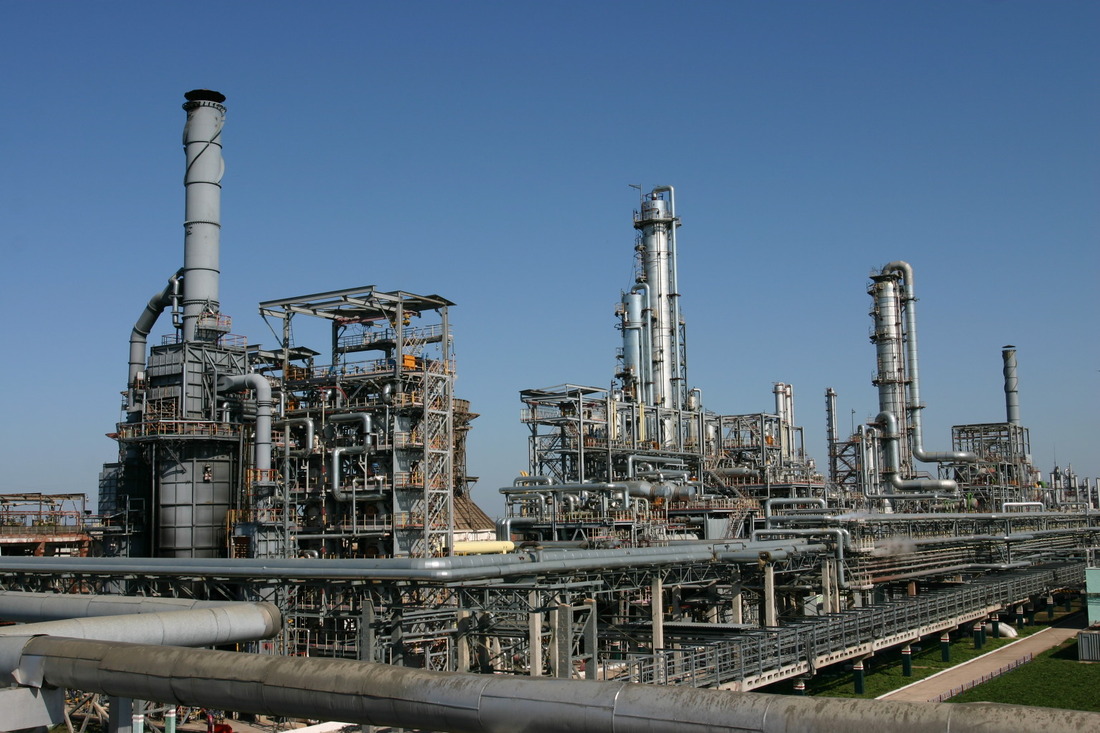 In 2005, a unit producing expanded polystyrene by a unique technology was put into operation at Monomer Plant. The first of the four American SRT-VI pyrolysis furnaces was also put in operation.

In the same year, another new facility, a state-of-the-art on-spot light-oil product loading station with a capacity of 3 million tpa, was put into operation at the Oil Refinery. The facility commissioning made it possible to take the outdated workshop equipment out of service, increase the safety level and improve the ecological situation by reduction of the atmospheric emissions.

In December 2006, a bitumen plant with a rated capacity of 300 kta was commissioned. The plant was designed for road and roofing bitumen production. 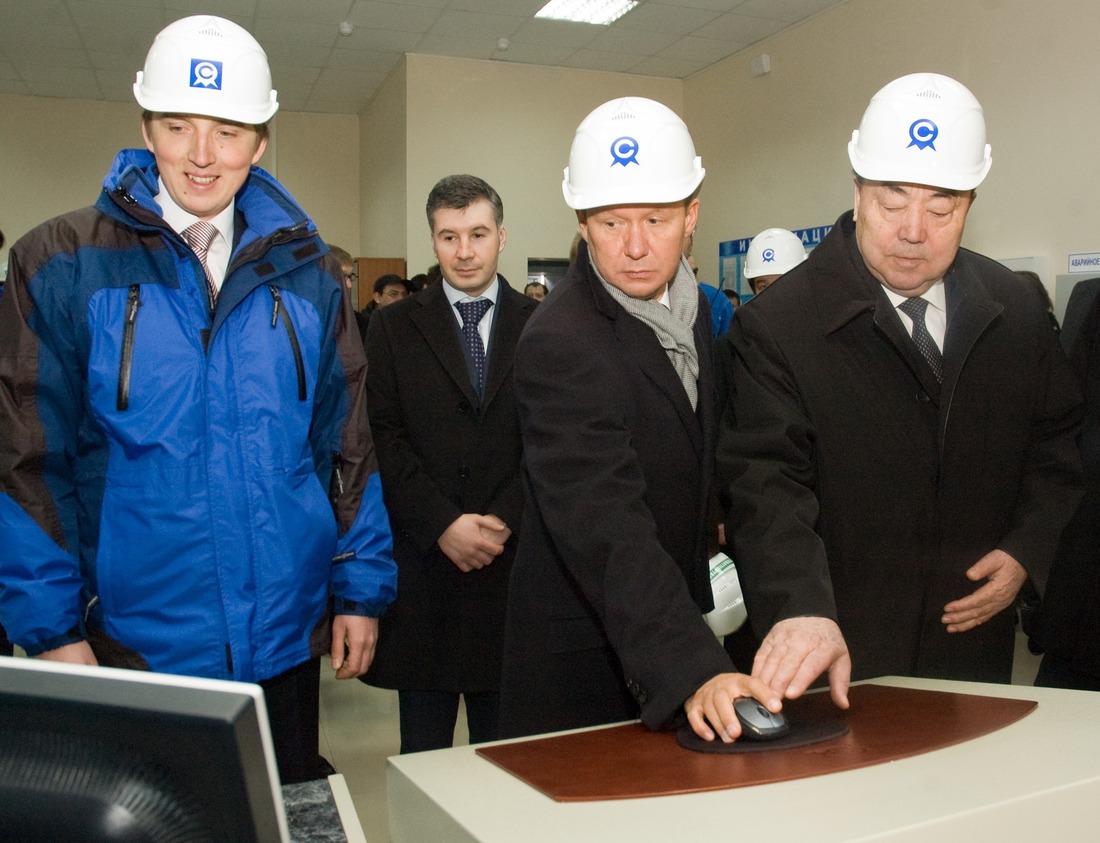 On April 10, 2009, Murtaza Rakhimov, the President of the Republic of Bashkortostan, and Alexey Miller, the Chairman of Gazprom Management Committee, took part in the official start-up of a new visbreaking unit at the Oil Refinery.

On April 10, 2009, as part of their visit to Salavat, Murtaza Rakhimov, the President of the Republic of Bashkortostan, and Alexey Miller, the Chairman of Gazprom Management Committee, took part in the start-up of a new visbreaking unit at the Oil Refinery of Salavatnefteorgsintez. The unit was designed to produce commercial fuel oil from heavy petroleum residue without involving light-oil products. The unit construction had been progressing rapidly since 2007 as part of Salavatnefteorgsintez Advanced Development and Investment Program for 2002–2010. Its basic design was developed by the Dutch representative office of Shell company. The visbreaker with a feedstock throughput of 1.5 million tons was the next step in upgrading the Oil Refinery aimed at obtaining products complying with the world quality standards.

In August 2009, by his Executive Order No. 523-rp of August 18, 2009, Dmitry Medvedev, the President of the Russian Federation, expressed his gratitude to Salavatnefteorgsintez personnel for major contribution to the development of petrochemistry. 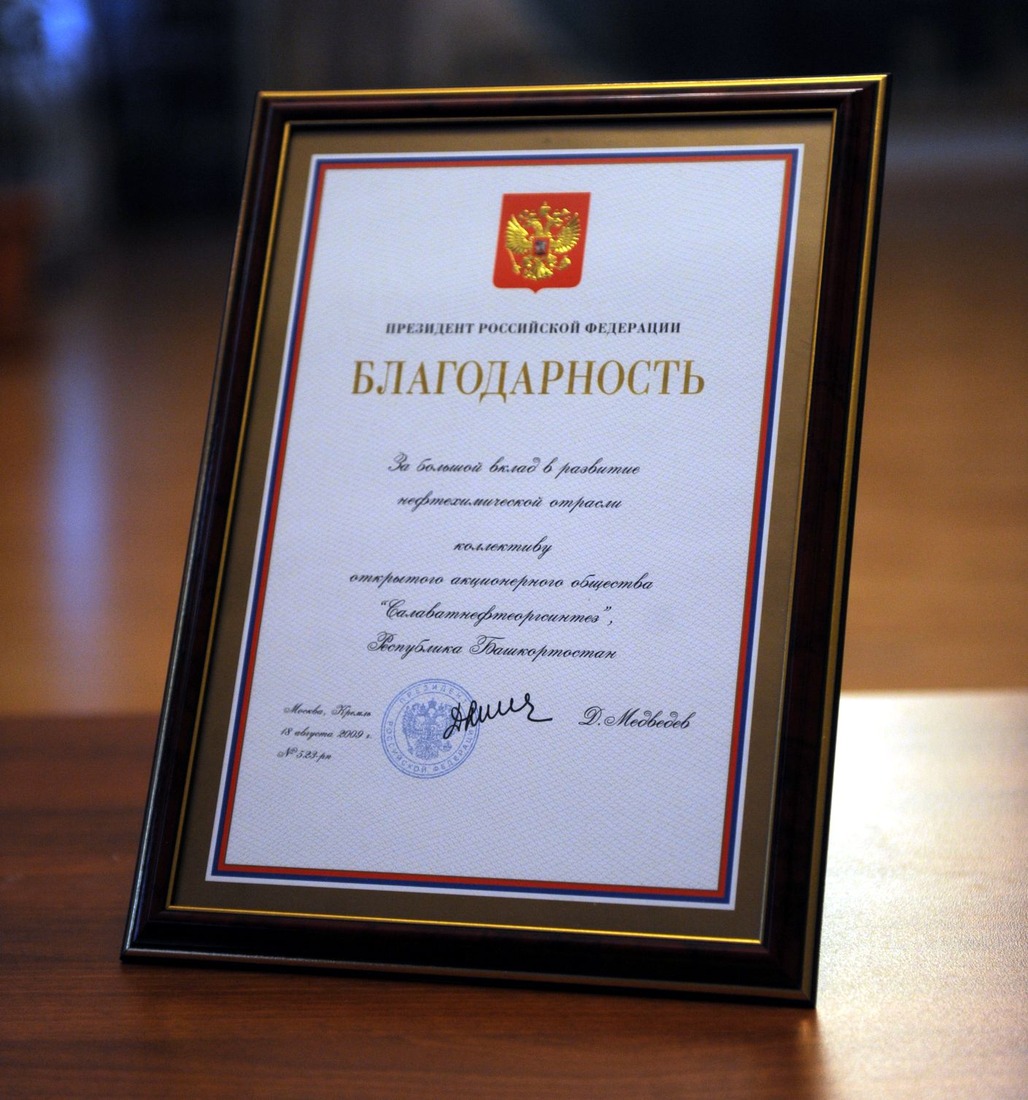 Certificate of gratitude from Dmitry Medvedev, the President of the Russian Federation

The Company realizes a number of investment projects aimed at upgrading the Oil Refinery. The realization of such projects will enable the Company to produce gasolines and diesel fuels complying with the new fuel regulations and European standards. One of such projects is the technical reequipment of the GO-2 hydrotreater at the Oil Refinery of Salavatnefteorgsintez, the first stage of which was completed in 2009. The second stage of the upgrading was over in October, 2012.

In March, 2010, the first batch of a new product was obtained at the HDPE production plant of Salavatnefteorgsintez. The production of HDPE by suspension is one of the Company’s priority projects. The design capacity of the facility is 120 kta of polyethylene with a possibility of expansion up to 200 kta. Ethylene, the main feedstock used in polyethylene production, is produced at the existing EP-300 ethylene and propylene unit of Salavatnefteorgsintez. In an effort to make its products competitive, the Company purchased one of the best technologies of PE production by suspension (Basell, Germany). The basic and detailed engineering of the new PE production facility began in cooperation with TECNIMONT (Italy) in 2004. The new facility will produce the end product that is over 30 HDPE grades which can be applied in the manufacture of high-quality gas and water piping (PE 100), large tanks, extra-fine film packaging material and a number of other products. To identify the Company products, HDPE and the goods produced from it, a trademark SNOLEN ® (Trademark certificate No. 380910) was registered. 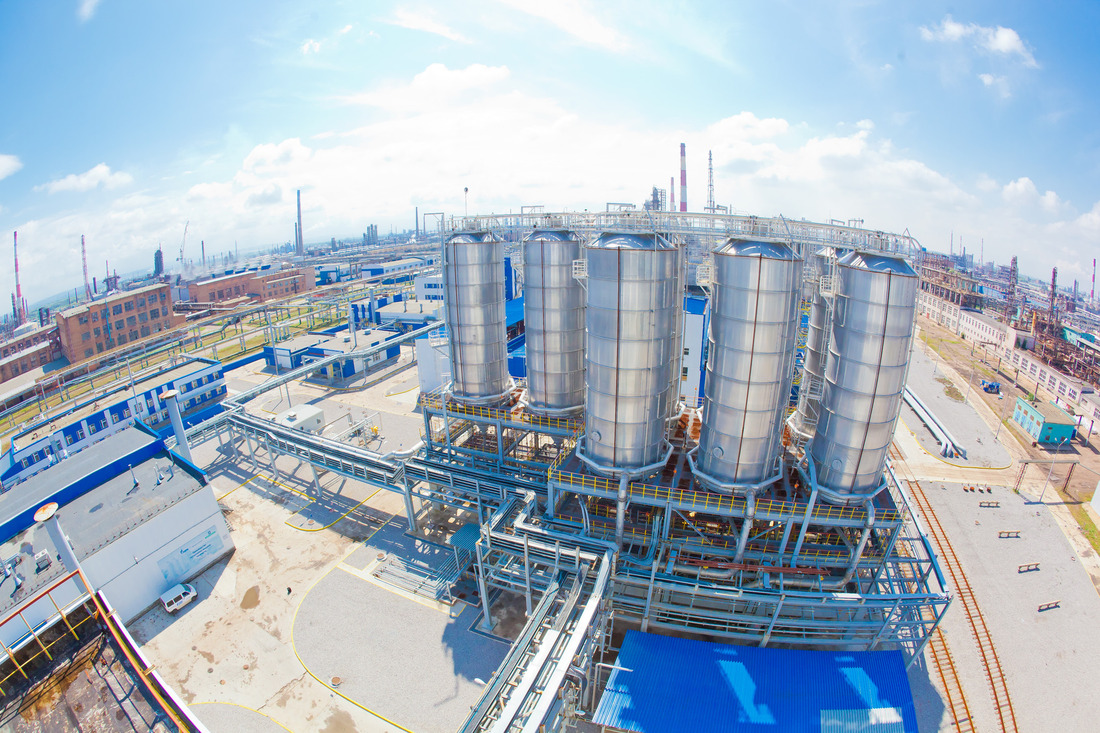 In 2010, Toyo Engineering Corporation (Japan) provided Salavatnefteorgsintez with basic design for the construction of a urea granulation unit. The new unit constructed in 2012 enables the Company to produce 1400 tpd of granulated urea. Besides, the quality of products has improved, new energy saving technologies have been implemented and the emission of pollutants into the atmosphere have been materially reduced.

During their meeting in November, 2010, Rustem Khamitov, the President of the Republic of Bashkortostan, and Alexey Miller, the Chairman of Gazprom Management Committee, reached an agreement to establish an All-Russian Oil and Gas Chemistry Centre and an Industrial Park.

In 2012, a brand new ELOU AVT-6 (atmospheric and vacuum distillation unit) with the capacity of 6 mta, designed for primary crude oil processing, was put into operation. The commissioning of ELOU AVT-6 enabled Gazprom neftekhim Salavat to increase the capacity of primary crude oil processing, improve the sharpness of separation of the desired cuts as well as to take out of operation the worn out and outdated production facilities. 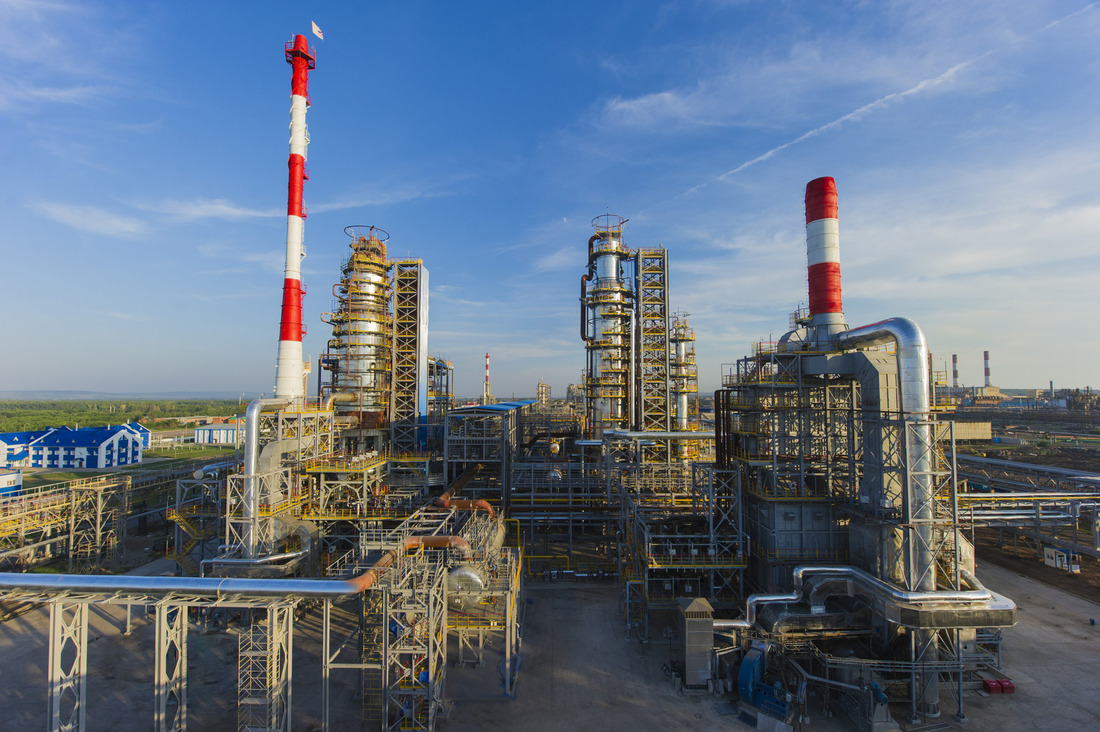 ELOU AVT-6 of the Oil Refinery

In May 2013, the Company celebrated the 65th anniversary of its foundation.

On October 1, 2016, the Company was reorganized in the form of transformation into LLC «Gazprom neftekhim Salavat». 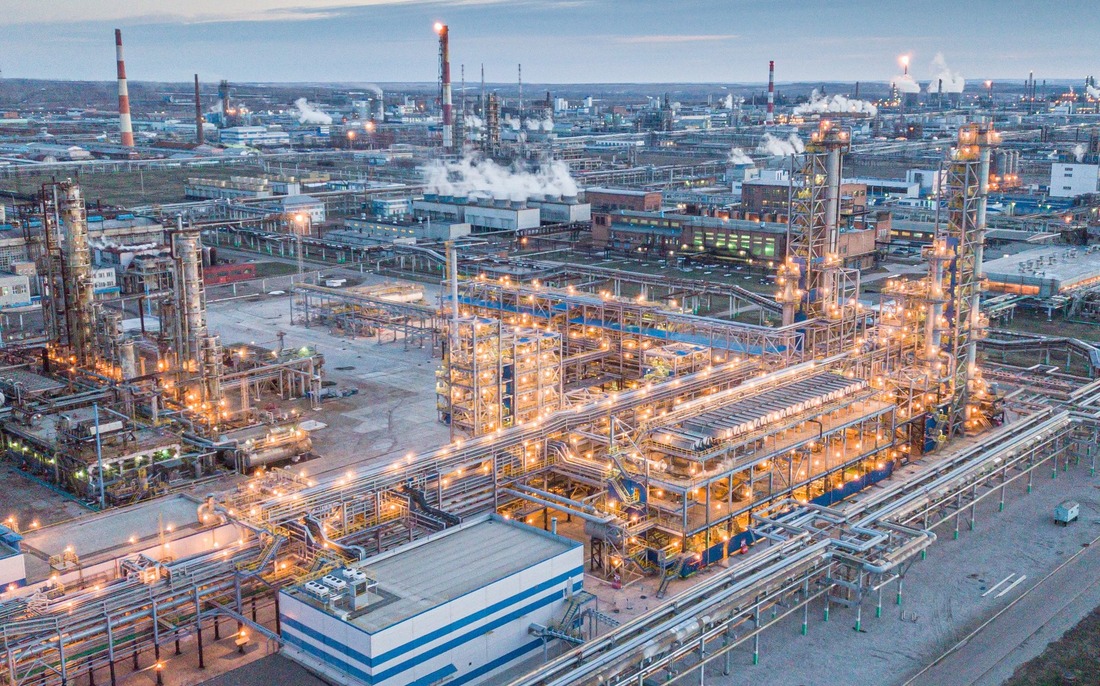 Unit of Isomerization of pentane-hexane

In May 2017, the Unit of Isomerization of pentane-hexane cut was commissioned to produce isomerate, a high-octane component that will allow increasing the production of Euro-4 and Euro-5 high-class gasolines. The feed capacity of the unit is 434 kta. The implementation of this investment project has become one of the stages of the Company's Refinery modernization. 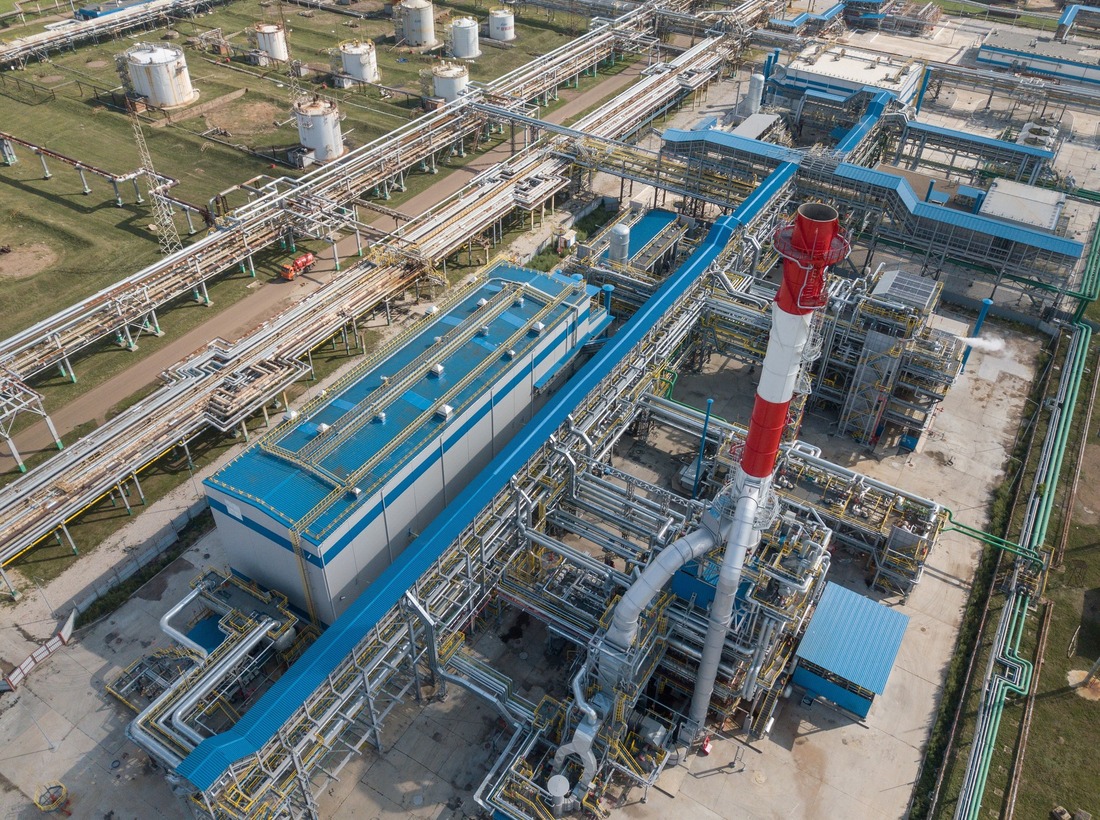 In September 2020, Gazprom neftekhim Salavat started up a Hydrogen Production Unit with a capacity of 25,000 normal cubic meters of hydrogen per hour. The modern unit was built under a large-scale program of the Refinery modernization; its commissioning will allow increasing the production of high-quality fuel of Euro-5 ecological standard. 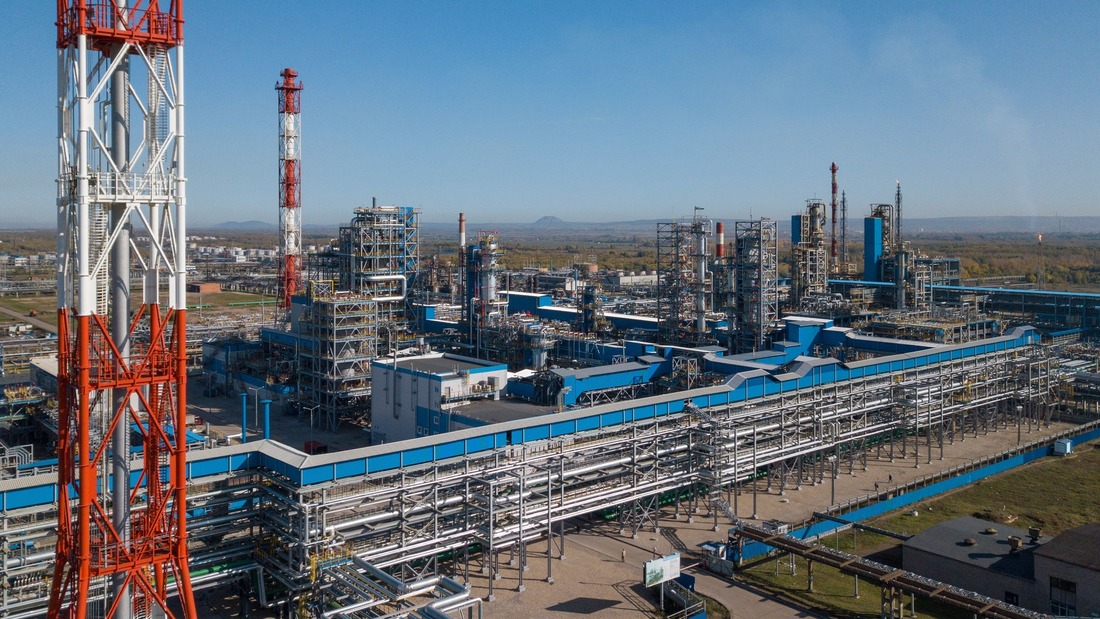 In 2021, the Сompany started up a Catalytic Cracking Complex for vacuum gas oil processing from ELOU AVT-6 and AVT-4 units to produce a high-octane component of commercial gasolines. The unit's capacity is 1.095 million tons of vacuum gas oil per year. The basic design was developed by Shell. This is the largest production facility under construction over the past 30 years at Gazprom neftekhim Salavat industrial site. This investment project is included in the modernization program of the Company's Refinery.

In August 2021, the General Meeting of the Company’s Members made a resolution on early termination of Director General’s powers exercised by Ayrat Karimov and transfer of the sole executive body’s powers (those of Gazprom neftekhim Salavat Director General) to another business entity (Management Company), namely Limited Liability Company RGD pererabotka Salavat.