Gazprom neftekhim Salavat implements social projects that represent the Company’s active public position and its key role in the development of Salavat and Bashkortostan.

Protect With the Heart

Protect With the Heart is a federal antidrug programme initiated by Gazprom neftekhim Salavat. Its objective is to prevent negative developments by raising awareness of teenagers and their parents of implicit threats, to point out the existing problems of drug and alcohol addiction and to tell about ways to prevent them. 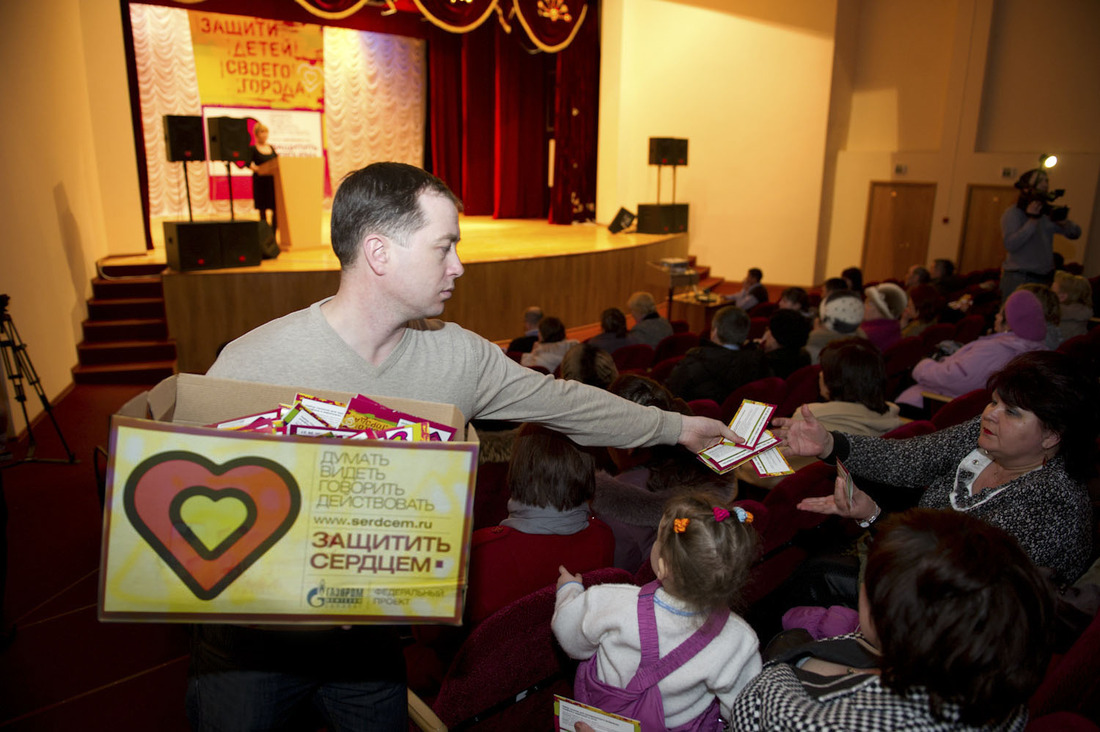 Protect with the Heart. Distribution of tests detecting drugs

As part of the Protect With the Heart Project, meetings of parents of 7 to 11 grade students with a narcologist-psychotherapist were held at schools, preventive and explanatory work was performed. During these meetings parents were given information on the project, on problems of drug and alcohol addiction among children and on methods to prevent them, tests allowing to detect alcohol and the most wide-spread drugs (such as marijuana, morphine derivatives and amphetamine) in a child’s organism at home, as well as other handouts. 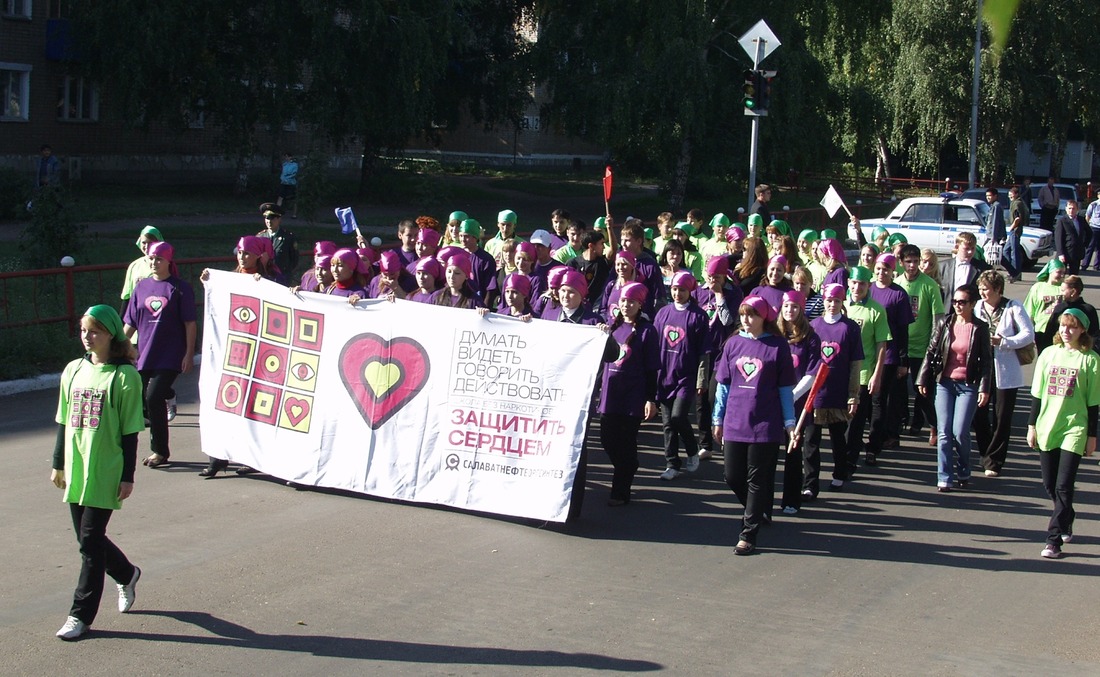 Protect with the Heart. An anti-drugs demonstration in Meleuz

Over the period of the programme implementation since 2008, over 1,000 preventive actions (campaigns, raids and meetings) have been carried out, more than 150,000 short-term tests detecting narcotic drugs and toxic substances in a child’s organism have been distributed among parents.

Up to now, many Russian towns as well as sustainable business representatives have joined the programme which is now being implemented at the federal level.

My Yard. My Street

In summer 2011, My Yard. My Street Project organized by Gazprom neftekhim Salavat together with the Salavat Administration and the Ministry of Internal Affairs of Bashkortostan started in Salavat. 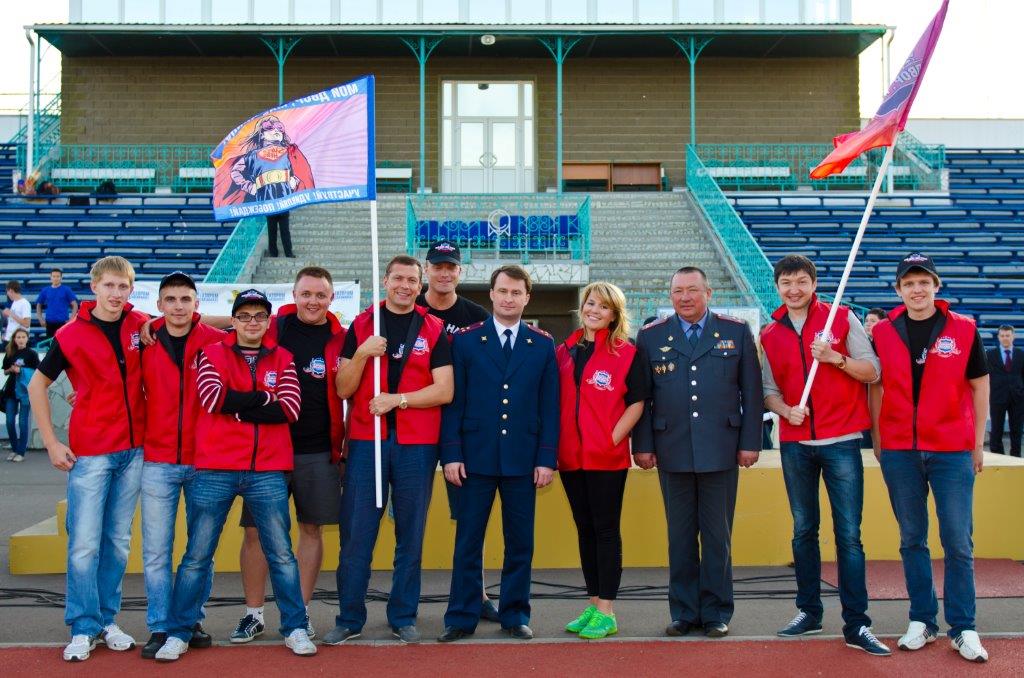 My Yard. My Street

The project is aimed at ensuring safety and cleaning up the town yards.

The participants were citizens organized in neighbourhood teams. More than 40 teams and 1000 enthusiasts took part in sports and creative competitions. Druzhny Dvor (close-knit neighbourhood) team from Leningradskaya street won and got the ultimate prize — a children’s playground. In 2012, a futsal championship among neighbourhood teams became the most memorable event held within My Yard. My Street social project.

My Yard. My Street. Final

Today, a volunteer movement has been created and is developing. My Yard. My Street project continues. Thousands of Salavat citizens have taken part in it.

School. The Fifth Element, a festival of street art, became the most memorable project of 2013. As part of the project, Russian street art painters painted the walls of two 9-storeyed buildings situated around the elementary school building of the First Lyceum with artistic canvases. 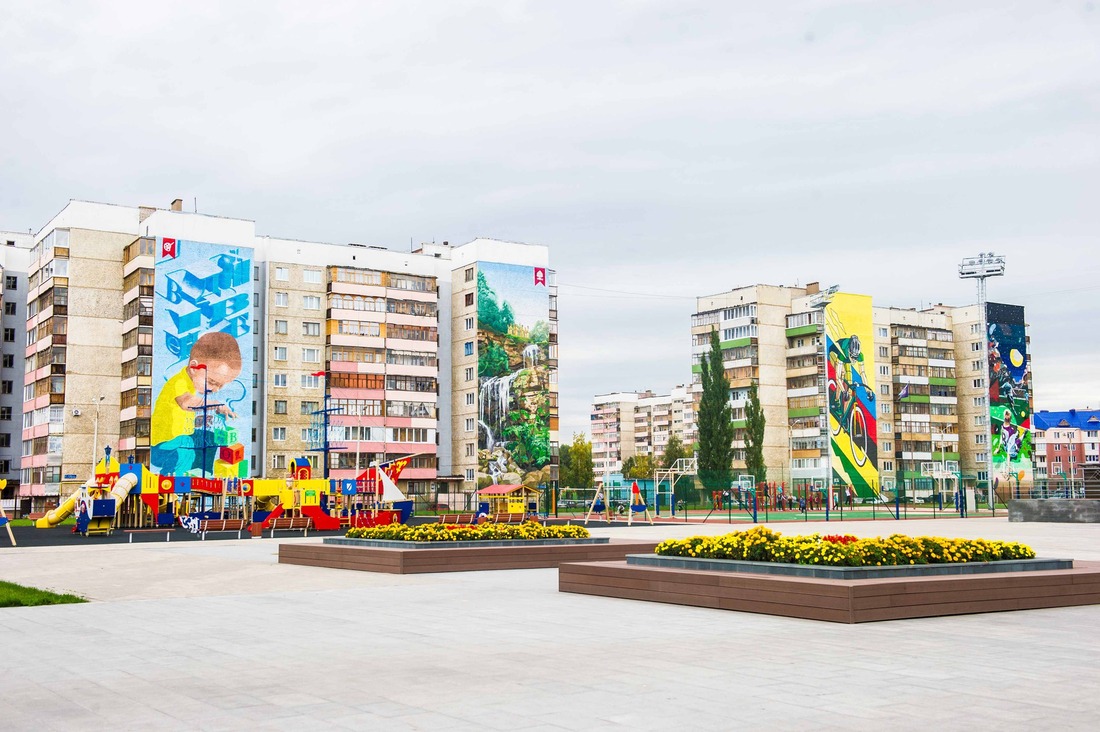 School. The Fifth Element. Street art on the walls of the buildings situated around the First Lyceum

The four key topics of all these compositions are science, nature, art and energy. As envisioned by the artists, these four elements constitute efficient education. The idea of the fifth element which is school lies in the fact that at school a child makes a choice and brings all the previous elements into action. 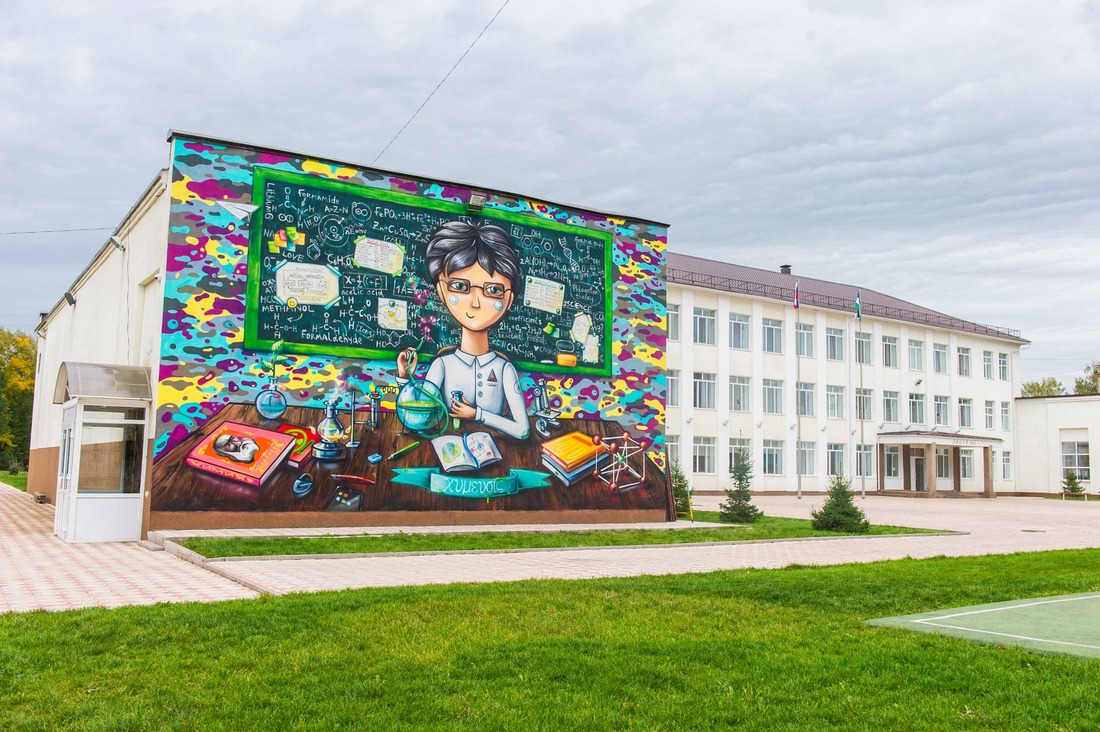 School. The Fifth Element. An element of the front of the First Lyceum building

The Company’s 65th Anniversary was also marked with the second street art festival during which a number of other works by street artists, including 3D graphics represented on pavement, appeared in Salavat.

Renovation of the Town Park

In 2011, Gazprom neftekhim Salavat undertook to lead a complete renovation of the Culture and Recreation Town Park of over 210 395 m2 in area. 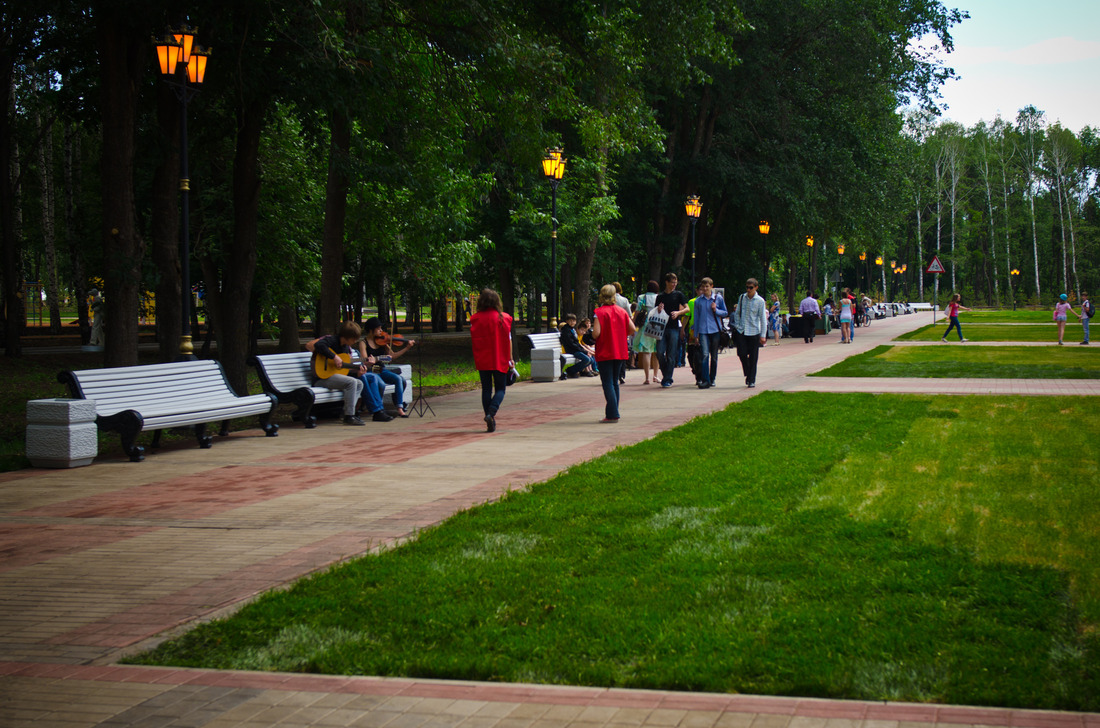 Renovated culture and recreation town park. One of the citizens’ most favourite recreation places

Founded in 1965 as the Youth Town Park, the recreation area was extremely popular with citizens. In the early 2000s, the park was completely neglected. 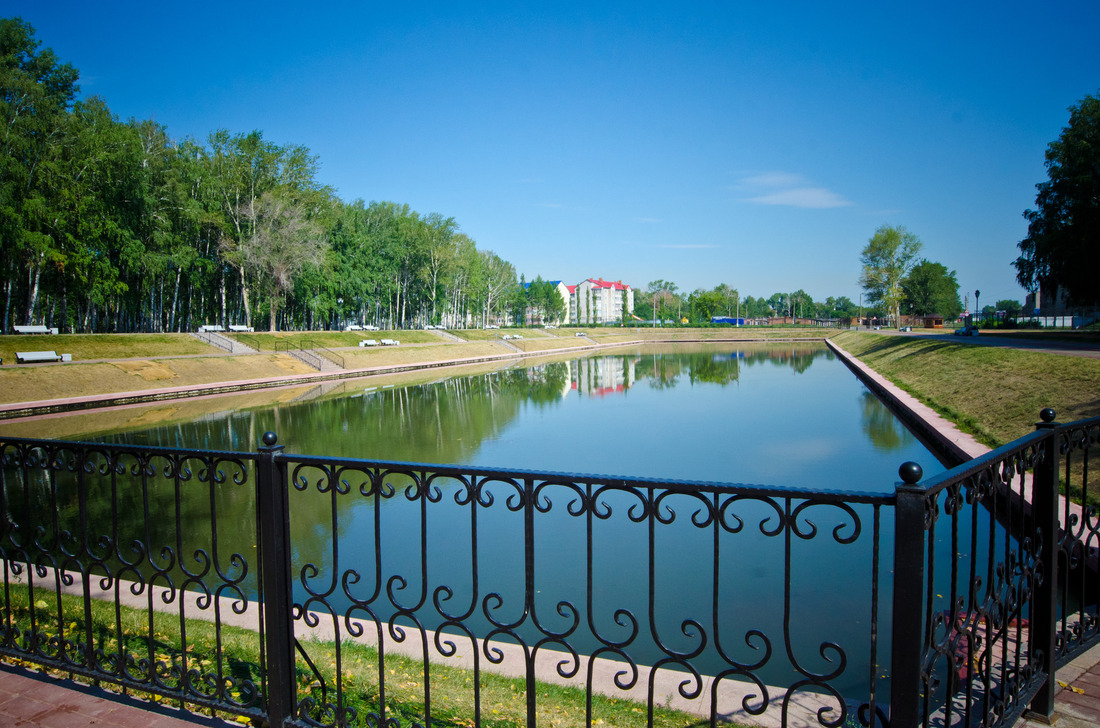 The park renovation started in October 2010 with bank revetment and clearing of the park pond. In May 2011, territory improvement works began. Old trees were cut out, ramshackle (tumble-down) buildings situated in the park territory were demolished, more than 200 Siberian pines were planted. New children’s sports and playgrounds as well as 15 km long run, cycle and pedestrian tracks appeared. At present, all the landscape works are completed. Along the 1.2 km long perimeter, there is new fencing, benches and street lighting. The park is equipped with new power supply and security systems. 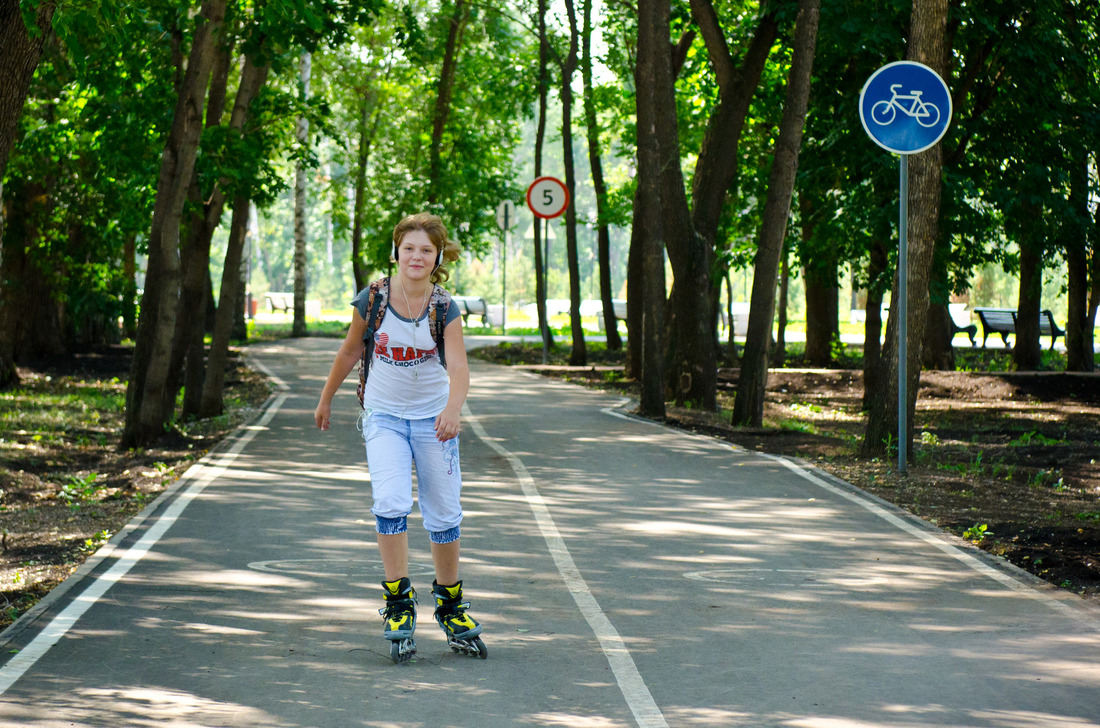 In 2012, as the works finished, the park opened for visitors again. 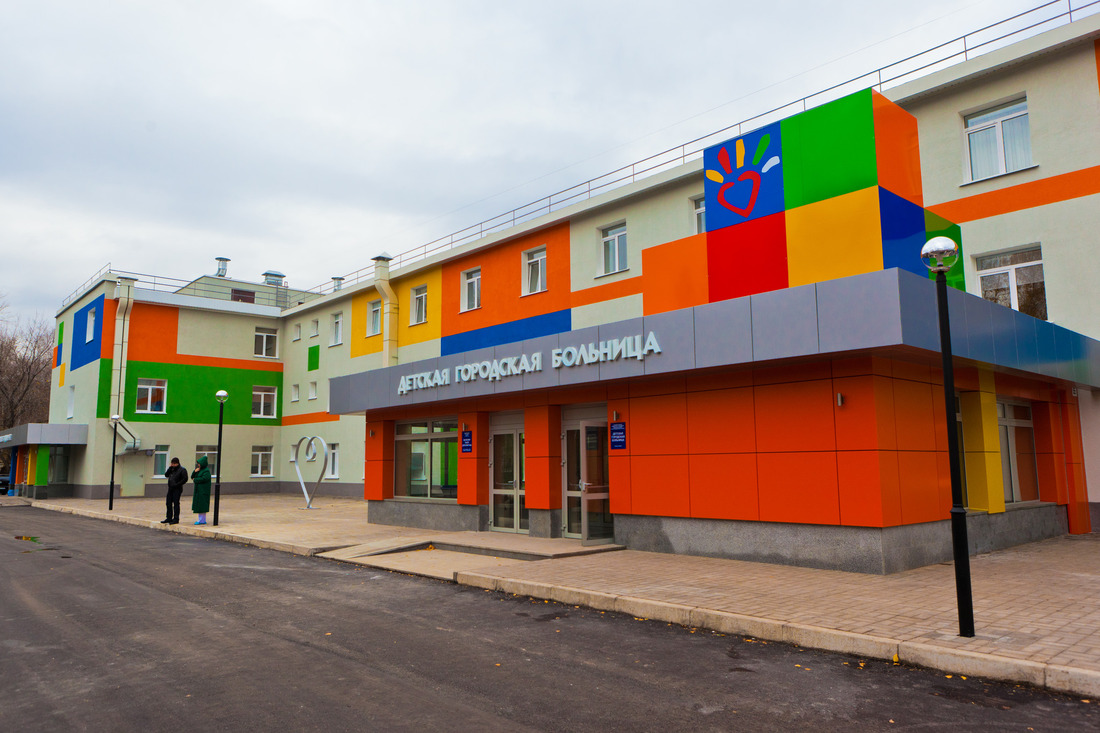 Modernization of Children’s Town Hospital. The front of the building

The hospital comprises a polyclinic with the capacity of 480 visits per shift, a day patient facility, a 24-hour hospital (consisting of departments of pediatrics, surgery and emergency, a surgery block and a new-born pathology department) and a milk kitchen. 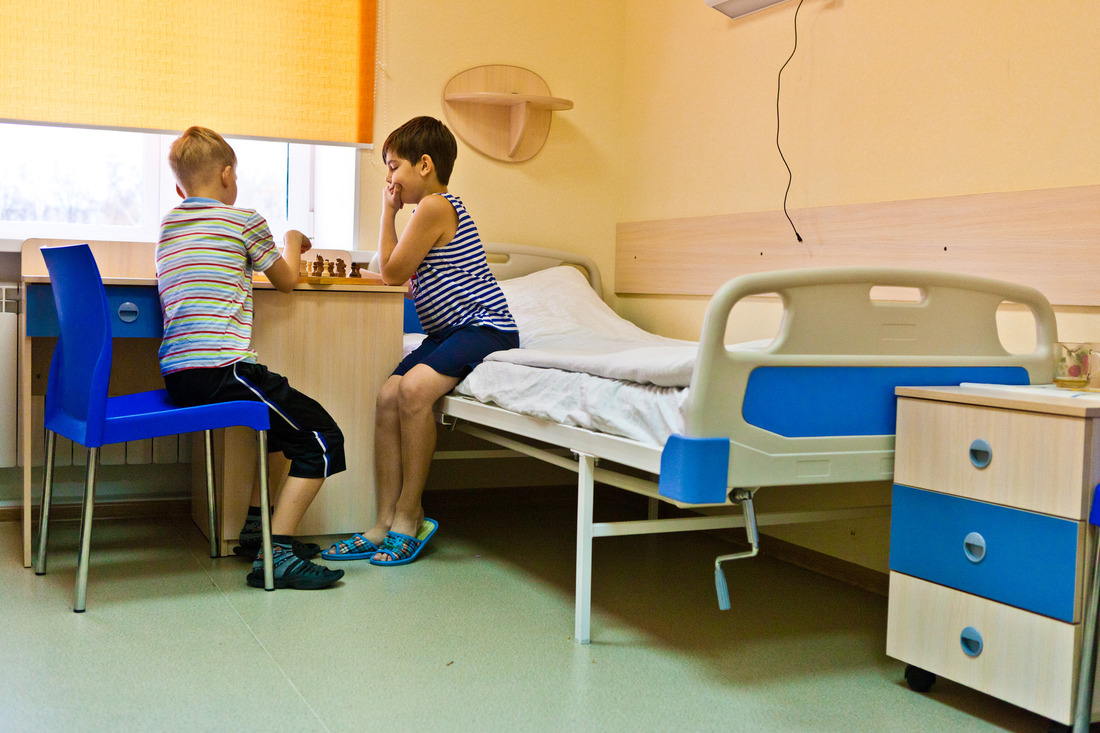 Modernization of the children’s town hospital started in 2011 and was completed in 2012. The surgery block and the emergency department underwent clean room renovation. The departments of emergency and new-born pathology got advanced ventilation systems. In whole, all the communications, such as water supply and sewage, ventilation and conditioning systems, were renewed. The fire-fighting system was brought in conformity with up-to-date requirements. The existing power supply and heating system was renovated. The receiving room was brought in conformity with sanitary norms and rules; the building was enlarged, separate patient’s rooms for surgical, pediatric and neonatal examination opened. A sanitation room appeared. The oxygen station was placed outside the main building. 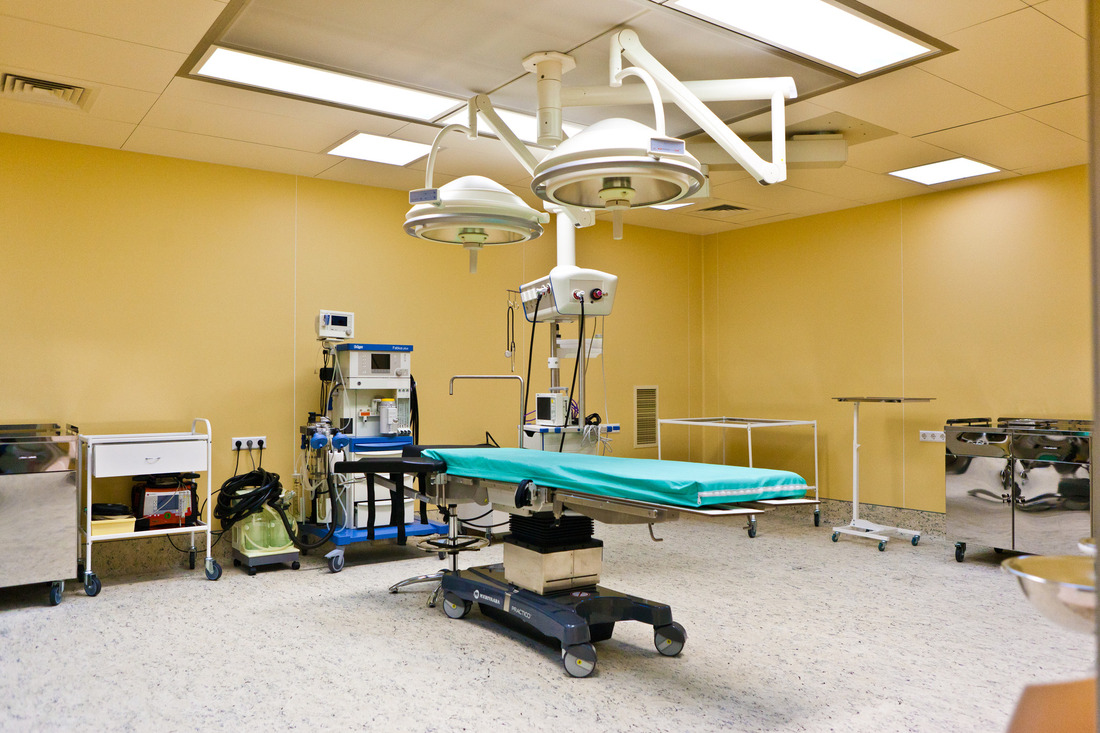 Staying at the hospital became more comfortable for kids and their parents. Sanitary and hygienic blocks with shower and toilet rooms in them were enlarged. The wards got new furniture, places for keeping clothes and personal things, swaddling tables and babies’ baths.

The hospital grounds are also marked by thoughtful landscape design: near the main building there is going to be a children’s outdoor playset and a fountain.

The number of important social projects of Gazprom neftekhim Salavat increases every year. The Company openly declares the necessity of social responsibility of business and appeals to other large enterprises to come out in support of such policy.