Carbon polygon to be created

The offer to create a carbon polygon in the Republic of Bashkortostan was approved at the meeting of the Expert Council under the Ministry of Science and Higher Education of the Russian Federation. Why is this project so important for our Company?

In February 2021, the Ministry of Science and Higher Education of the Russian Federation launched a pilot project to create carbon polygons in Russian regions for the development and testing of carbon balance control technologies.

The project of carbon polygon creation in the Republic of Bashkortostan was prepared by the Eurasian Climate Consortium comprised of the Eurasian Research and Educational Center participants — leading universities and scientific organizations of the Republic, such as Bashkir State University, Ufa Federal Research Center of the Russian Academy of Sciences, Bashkir State Agrarian University, as well as major industrial partners: Bashkir Soda Company, Gazprom neftekhim Salavat, Research and Design Institute of Oil and Gas PETON. Ufa State Petroleum Technological University assumed the operator function for the Republic’s carbon polygon. Expert support for the implementation of the project is provided by Skolkovo University of Science and Technology.

On September 23, 2021 the offer was successfully defended before the Expert Council of the Ministry of Science and Higher Education of the Russian Federation. Federal experts appreciated the high quality the application had been prepared with as well as the environmental issue alleviation. The project of the carbon polygon creation in Bashkortostan was unanimously approved by the Federal Council.

Gazprom neftekhim Salavat endorsed the initiative of the Government of Bashkortostan in carbon polygons creation. The Company became a part of the Eurasian Climate Consortium established in July 2021, which is responsible for developing and implementing a program of the carbon polygon creation and operation.

The carbon polygon creation is a strategic, scientific and educational project of high priority for the Republic with a budget of 702 million rubles. The project of the carbon polygons network creation in Russia is being implemented by the order of President Vladimir Putin.

The polygon availability will allow Bashkortostan to take a leading position in atmospheric air control and in the new low-carbon economy. As part of the project, it is planned not only to monitor climatically active gases and assess the absorbing capacity of natural areas. The main feature of the project is the development of a full cycle of technologies for CO2 capture, sequestration and underground storage.

The Bashkortostan team’s offer is to arrange systematic work on the observation of greenhouse gases in six specially designated areas. Such areas are to be created near Ufa and in Nurimanovsky District on the bank of the Pavlovskoye Reservoir. They are located in different climatic zones and differ in types of vegetation and options of use. Scientists are going to use them for investigation of the phytomass ability to capture and process greenhouse gases. The total area of the future polygon may reach 214 hectares.

About the Company’s environmental objectives

Gazprom neftekhim Salavat uses a programmatic approach to solve environmental problems. The Company has developed and approved an Environmental Program for 2020–2022. The largest event of the program is the reconstruction of treatment facilities. At year-end 2020, about 1.5 billion rubles have been disbursed there.

Another large event expected to produce an economic and environmental effect (reduction of sulphur compounds emissions) is the construction of a new Elemental Sulphur Recovery Unit (SRU). This is a major investment project. In 2020, 7.3 billion rubles of the Company’s own funds were disbursed there. 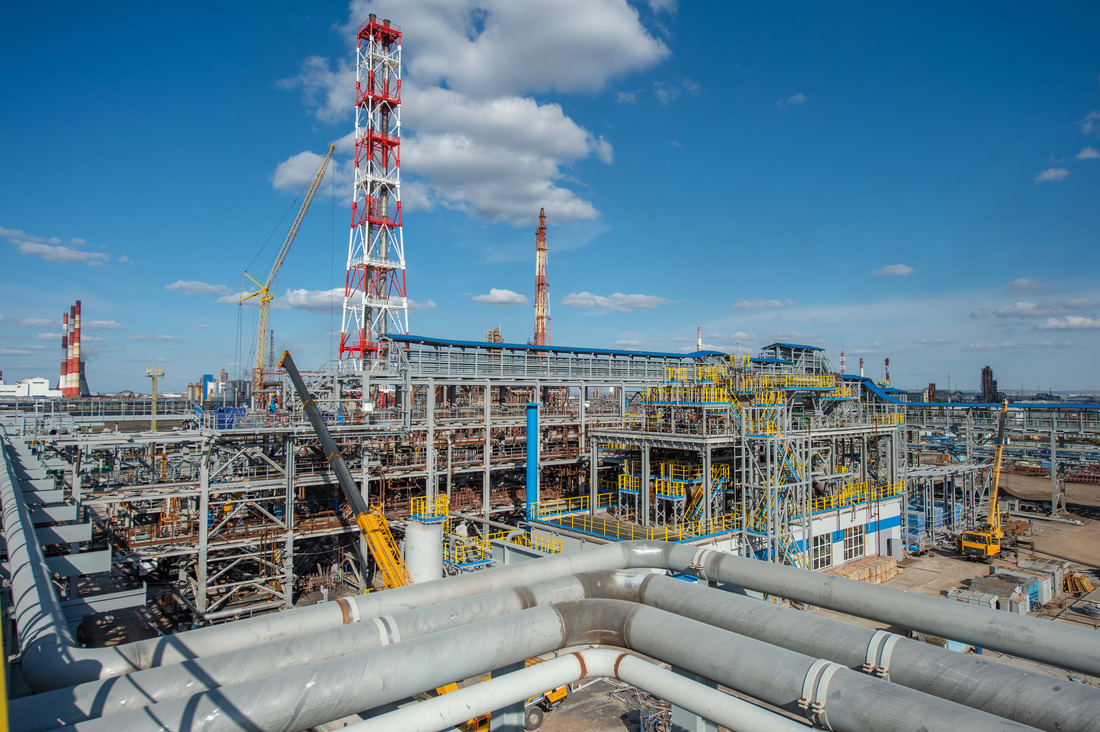 Our company has two objectives: to reduce the impact of its plants on the environment and ensure the products competitiveness.

Reduction of CO2 emissions into the atmosphere is especially significant for petrochemical enterprises as well as enterprises of fuel and energy complex being large exporters. This is due to the fact that from 2024 the European Union intends to introduce protective duties on importing products with a high carbon footprint. Additional taxes can hurt the economics of enterprises willing to work together with research and educational organizations to reduce emissions. This problem will be alleviated, among other things, by carbon polygons creation.

August 2021, ecology and climate theme-based month of the Year of Science and Technology, was marked by the official opening of Russia’s first carbon polygon. The polygon of the West Siberian Scientific and Educational Center is located on a biological station «the Lake Kuchak». It is to unite the forces of science, business and the region to study greenhouse gas flows.

What is a carbon polygon? What is it intended for?

Extract from an interview with Nikolai Durmanov, special representative of the Ministry of Science and Higher Education of the Russian Federation on biological and environmental safety, Deputy Chairman of the Expert Council on scientific support for the development of carbon balance control technologies.

— The economy decarbonization is considered one of the main ways to combat climate changes. Decarbonization means the reduction of the ecological footprint that any product or service leaves behind. We should minimize emission into the atmosphere of greenhouse gases heating the atmosphere. And at the same time, it is a set of technologies that should remove already released gases from the atmosphere in order to reduce their concentration and slow down the heating processes.

So, less emissions, more absorption, but the question is “how to measure it?”. How can we understand, which industry or which area has a long and harmful ecological footprint, and who has fully mastered a set of so-called low-carbon technologies and fully complies with international climate safety standards? We need methods for measuring greenhouse gas emissions and absorption. And these methods should be not only ground-based, even if equipped with modern sensors and instruments. We also need remote ones, so that it would be possible to monitor the carbon balance of large territories from space or aircrafts. It is for the development and testing of such methods that a national network of carbon polygons is being created. They are located from Sakhalin to Kaliningrad and include forests, swamps, agricultural lands, because we need calculations for all types of ecosystems in our country.

This article is based on the data posted on .